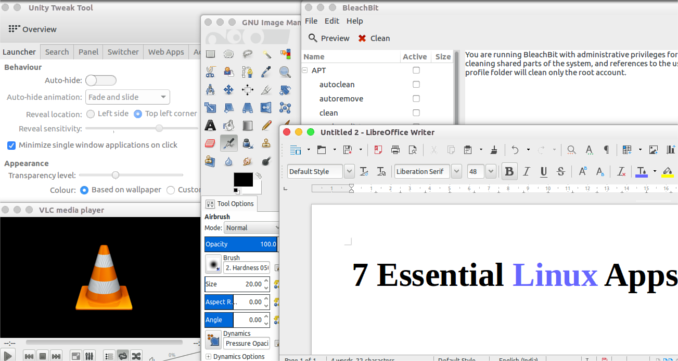 These are the 7 essential Linux apps. Which a Linux user should not miss

By default every Linux distribution comes uploaded with a video player and one of the well known player is m player. If you feel you really need a better player than than m player. Then you have VLC player from the open source which is one of the well known and widely used cross platform multimedia player. VLC player can support almost every video and audio formats. And there is no need for you to install additional codecs to it. In case of advanced users VLC also comes with an option for command line tool.

Alternative for c cleaner in Linux from open source which needs root user permission to clean disks, and files. Bleachbit is an advanced cleaning tool which can clean your swap memory, cache files. Internet history, temporary files, cookies and can delete unnecessary files to free disk space in order to maintain your privacy.

G parted is a virtual disc management tool from the open source for Linux distributions. By using this tool, you can virtually manage your hard disk partitions such as resizing of the hard disk, copying data from a disk moving data from a disk to another without data loss and even for rescuing data from lost partitions. Even clone partition and imaging disks can also be done with this tool. Apart from it’s function, it has a very simple GUI to work with.

Openshot is a video editor from the open source for creating videos for YouTube, Vimeo, xbox. The openshot is available for windows and Linux operating system. Openshot comes loaded with many video editing features such as transitions, 3d animation, audio mixing and much more.